To get to know Matthew Nimitz, the UNITED NATIONS ENVOY on the ‘name issue’...- “a great believer in globalism"!!! 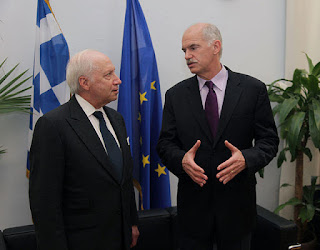 Matthew Nimetz (left) with George Papandreou during a July 2009 meeting

[first read the BBC article below]

Matthew Nimetz wants to make something clear - he has not spent every waking moment of the past 23 years thinking about one word: "Macedonia".
"I have probably thought about it more than anyone else - including in the country," says the 78-year-old US diplomat. "But I have to disappoint anyone that thinks it's my full-time job."
Since 1994, Nimetz has been trying to negotiate an end to arguably the world's strangest international dispute, in which Greece is objecting to Macedonia's name and refusing to let it join either Nato or the EU until it's changed.

When Nimetz began his work on the dispute he was serving as US President Bill Clinton's special envoy, but since the end of 1999 he's been the PERSONAL envoy of the United Nations’ secretary-general - his task to nudge the two sides (Greece and FYROM) slowly towards a resolution, for a token salary of $1 per year.

Macedonia got into the UN by agreeing to be called The Former Yugoslav Republic of Macedonia (FYROM) for all official purposes, but this was not intended to be a permanent solution to the problem, and created a new set of difficulties.
"It makes for very awkward sentence construction," Nimetz says, with some understatement.
Ban Ki-moon, the former United Nations’ secretary-general, once got muddled and called the country the "Former Yugoslav Republic of Yugoslavia" by accident. "He said to me, 'You've got to solve this problem. It's driving me crazy,'" Nimetz says.

Ban-Ki Moon in Macedonia in 2012 with President George Ivanov