"An Original American Proposal against Erdogan 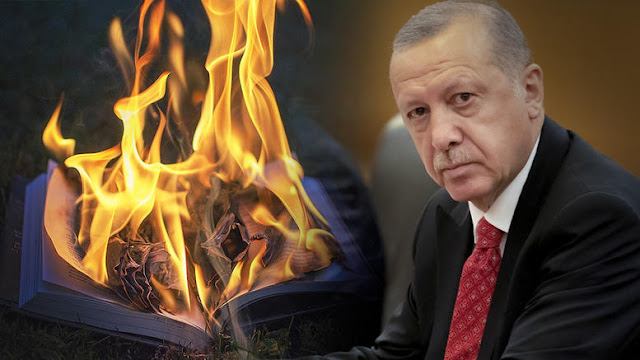 “Cut Turkish Airlines off from Europe rather than be complicit to theft" is the brilliant proposal by the American Enterprise Institute's Distinguished Scholar, Dr Michael Rubin. While the European Union is hesitating to impose its promised serious sanctions to Erdogan's Turkey for his "imperialist" adventures in Cyprus' Exclusive Economic Zone, Dr Rubin's creative proposal may well work to “show Erdogan that the world has had enough of Turkey's pillaging”.

Turkey invaded Cyprus on July 20, 1974, and has not looked back. While Turks may say they did so to protect Cyprus’ Turkish minority, Greece’s return to democracy made any Greek plans to unite with Cyprus moot. Turkey’s subsequent second invasion in August 1974 was nothing less than a land grab followed by methodical ethnic cleansing. Today, there are as many displaced Cypriots than there are displaced Palestinians.
Cyprus is, of course, not alone: Turkey has also grabbed territory and conducted ethnic cleansing in both Syria and Iraq.
The crisis in Cyprus has long been a forgotten and largely frozen conflict. U.N. officials and other diplomats occasionally hosted talks, but the reluctance of one side or another to change the status quo ultimately doomed each round. In 1983, the Turkish-backed government in Northern Cyprus declared its independence, a move no other country but Turkey recognized.
In short, this means that not only the European Union and NATO, but also Turkey’s closest allies such as Somalia, Azerbaijan, and Malaysia, as well as every single other UN member rejects Turkey’s claims to territorial waters around Cyprus and by extension recognizes that the entirety of Cyprus’ exclusive economic zone belongs to the recognized Cypriot government in Nicosia rather than the so-called Turkish Republic of Northern Cyprus.
By sending ships into Cypriot waters to drill for oil and gas, Turkey is simply seeking to steal Cypriot resources for its own use. For all of President Recep Tayyip Erdoğan's anti-colonial rhetoric, he now presides over the most flagrant example of 21st century imperial exploitation.
The question then becomes, what will Europe do about it?
No one wants war with Turkey, an attitude that Erdoğan counts upon as he embraces ever more resources. But, with every day, week, and month that pass once Turkey finds and begins exploiting Eastern Mediterranean energy, ever greater amounts of Cypriot resources will be stolen.
Perhaps it’s time then that European countries and others seeking to reinforce the rule of law target Turkey’s own bank balance.
Erdoğan has made the state-owned Turkish Air the flagship of his own ambitions. State media brag about the airline’s ever-increasing reach, and Erdoğan recently inaugurated a major new airport outside Istanbul to accommodate greater Turkish air traffic. (The airline apparently also supports more covert operations for Erdoğan, such as illegally transporting Turkish weaponry). Of course, the airline also supports Turkey’s economically important tourism industry.
Perhaps, then, the European Union and the United States could respond to Turkish provocations in the Eastern Mediterranean by denying Turkish Air landing rights. Let the airline fly to Somalia, Sudan, Azerbaijan, and Pakistan, but there is no reason why European countries should support Turkey’s economy at a time when Erdoğan seeks to supplement it with theft.
Diplomatic hand-wringing on Cyprus has not resolved the problem for 45 years, and there’s no reason to suspect finger-wagging will be enough to do so now. It’s time the European Union and those committed to the post-World War II liberal order do more to show Erdoğan that the world has had enough of Turkey’s pillaging. If Turkey’s new airport loses traffic and if beach resorts in Turkey and Turkish-occupied Cyprus go vacant, so be it. The solution is simple: Withdraw Turkey’s ships and end Turkey’s illegal occupation.
Michael Rubin (@Mrubin1971) is a contributor to the Washington Examiner's Beltway Confidential blog. He is a resident scholar at the American Enterprise Institute and a former Pentagon official.

Michael Rubin
Michael Rubin is a resident scholar at the American Enterprise Institute, where he researches Arab politics, the Gulf Cooperation Council, Iran, Iraq, the Kurds, terrorism, and Turkey. He concurrently teaches classes on terrorism for the FBI and on security, politics, religion, and history for US and NATO military units.

A former Pentagon official, Dr. Rubin has lived in post-revolution Iran, Yemen, and both pre- and postwar Iraq, and he spent time with the Taliban before 9/11. He is the author, coauthor, and coeditor of several books exploring Iranian history, American diplomacy, Kurdish studies, and Shi’ite politics, including “Kurdistan Rising” (AEI