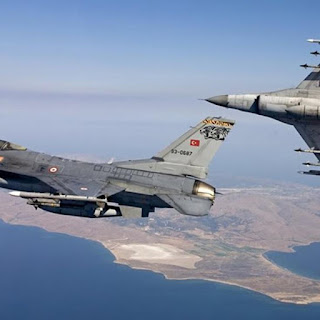 Even after weeks of increased tension in the East Mediterranean and Libya, caused by continuing Turkish provocations or outright military involvement (Libya), threats (Greece, Cyprus), Brussels has shown its weakness.
Again, it has shown it is not a European Union but a loosely organized economic body without the will or power to confront aggression to its member countries.
It has done so faced with a possible conflict involving EU member countries and NATO allies.


Continuing Turkish power politics, as shown and implemented by Erdogan, is met by official condemnations by EU officials, but no real action is being taken.
The latest show of weakness is the statement made by EU foreign policy chief Josep Borrell, after holding a telephone conversation with Turkish Foreign Minister Mevlut Cavusoglu.
He stated that both parties have agreed on the need to de-escalate tensions in the Eastern Mediterranean. A new meeting is planned for late August.
Borrell also reiterated that Brussels and Ankara will be “working together on ceasefire in Libya in the framework of the Berlin process.”
These EU reactions are not only a slap in the face to its own members Greece, France, and Cyprus, but also gives Turkey carte blanche to increase its overall military engagement in the East Med and Libya.
The current Brussels approach seems to be taking a blind eye to the continuing and even increasing military supplies to Libya’s government GNA factions.
The latter is officially not allowed and should be strictly prohibited by a NATO-supported naval force in the Mediterranean.
As was highlighted several weeks ago, Turkish naval forces are officially protecting arms deliveries to Libya even if this is putting NATO naval forces at risk.
A French-Turkish naval confrontation almost ended in a full-scale conflict.
The ongoing Berlin discussion with regards to Libya’s future or a credible ceasefire is not based on reality.
The Libyan conflict, caused by Western military intervention to remove former dictator Muammar Ghadaffy, is now hijacked by external non-European parties, such as Turkey, UAE, Russia, Egypt and others, in a geopolitical power play of unknown order.
Due to its links to NATO and the EU, it seems that Turkey is still given the opportunity to set up a full-scale power base which will lead to direct confrontation with the LNA-Russia-UAE and Egypt-backed forces.
Brussels’ position is still to support the UN-EU backed GNA Tripoli government, which is not recognized even by the Libyan parliament.
Inside EU member countries a split has occurred, however, as France-Greece have openly chosen to support the rival LNA forces, against Turkish military intervention.
Ankara is also using the Libyan issue to put a major smokescreen on its ongoing and even more threatening military moves in the East Med.
Even though officially, Brussels, supported by Germany-France and Greece/Cyprus, has condemned Turkish navy and air force threats to the Greek islands and Cyprus, the facts on the ground are different.
Erdogan is still holding Brussels by the balls, as they say.
Threatening a new refugee tsunami and possible action in the East Med has been the main weapon until now to bring Brussels, Berlin, Rome, The Hague and others to their knees.
Not even an attempt to call Erdogan’s bluff has been put on the table.
Clear and present danger
Borrell’s approach again shows Brussels weakness in case of a military security threat to EU members.
The Greek and Cypriot position on Turkish military moves in the East Med are based on facts and should be approached with a full commitment by Brussels (and NATO).
International maritime law and agreements on maritime Economic Exclusivity Zones (EEZ) are clear, Athens and Nicosia are right.
Looking at the EU-Brussels situation, fully engaged in the COVID economic discussion, East Med countries should not expect any real help against Turkey.
Even though Brussels could put a real lid on Ankara’s aggression and blackmailing geopolitical moves.
A full-blown financial sanctions regime on Turkey, blocking European investments and imports would bring the country with one stroke to a standstill.
No such thing is discussed even in the offices of the EU Commission.
The time for talking is over, new delays in action only will give Ankara options to increase its threats and stranglehold on Libya, while invading air and maritime space of EU-NATO member countries.
If Brussels wants to prevent a real escalation in the coming weeks, action is needed.
Without Brussels putting Erdogan in his place, a full-scale military clash will happen in the Mediterranean, Europe’s southern border region.
Brussels is not leading at present, but resembles a group of unwilling scared European leaders, still thinking that words are more powerful than arms.
In reality, military threats and actions only are able to be confronted by military means.
The EU’s lack of a defence strategy and NATO’s Turkey position puts the region in clear and present danger.
EU leaders – Von der Leyden and Borrell – should quickly ask Clancy’s Jack Ryan for advice.
Cyril Widdershoven is Global Head of Strategy, Berry Commodities Fund