Known to millions around the world as the “King of the Waltz” André Rieu posted a tribute video to Mikis Theodorakis on Facebook that has exceeded 4 million views in a few days.

“Thank you Mikis Theodorakis for your wonderful music! You will be greatly missed!,” Rieu wrote, as his orchestra is playing Zorba, the song from the Oscar-winning film “Zorba the Greek”. Hundreds of people are seen dancing to the tune.

André Rieu is a Dutch violinist and conductor best known for creating the waltz-playing Johann Strauss Orchestra. He and his orchestra have turned classical and waltz music into a worldwide concert touring act, as successful as some of the biggest global pop and rock music acts.

Rieu created the Johann Strauss Orchestra in 1987 and began with 12 members, giving its first concert on January 1, 1988. Over the years it has expanded dramatically, as of 2020 performing with between 50 and 60 musicians.

Rieu and his orchestra have appeared throughout Europe, North and South America, Japan, and Australia. The size and revenue of their tours are rivalled only by the largest pop and rock music acts.

The two notes of “Zorba’s Dance” are two of the most recognizable in the world, granting Mikis Theodorakis immortality.

Theodorakis’ biographer Guy Wagner made a comparison between the great Greek and Ludwig van Beethoven.

In Wagner’s “Mikis Theodorakis: A Life for Greece” (2002, Typothito Press), the biographer matches the music of Theodorakis with the greatness of Ludwig Van Beethoven.

Wagner wrote that if the listener hears four notes from Beethoven’s 5th symphony (The Symphony of Destiny), he immediately recognizes it. This way Beethoven achieved immortality.

With Theodorakis’ “Zorba’s Dance,” two notes is enough for one to recognize the music. In other words, according to the biographer, Beethoven achieved immortality with four notes,  but Theodorakis with only two, and that makes Theodorakis better than Beethoven.

“This is, of course, a compliment,” German composer Henning Schmiedt says, “but deep down Theodorakis’ themes are his footprint to which every one has access to.”

“I know that with his music, (Theodorakis) made the world more beautiful… He generously gave the gift of his music to the world… I am grateful I worked with him,” Schmiedt added.

Related: The Fascinating Story of the Real-Life Alexis Zorbas 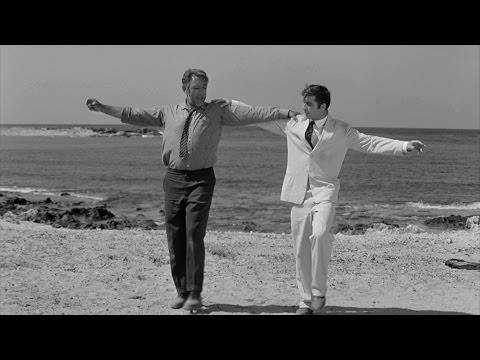