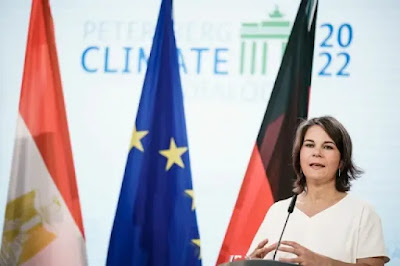 Allow us at the outset to welcome you in your first visit to Greece under your official capacity. You are arriving in difficult moments for humanity because of the war in Ukraine and we think that this issue will dominate your bilateral talks in Greece.

Regarding this issue, there are some questions that concern more the Greek people and less the Greek government. The majority of the Greek people while condemning the Russian invasion, is against the delivery of weapons to Ukraine. We cannot understand why Germany is not sending heavy weapons directly to Ukraine and is doing it by the intermediary of Greece, Czech Republic and Poland with the promise of replacing them immediately.

Perhaps you are of the opinion that in this way you will one day declare that Germany never sent weapons to Kiev, but then you underestimate Russia who knows very well what you are doing. As far as Greece is concerned, you will give it Marder armored vehicles in exchange for BMP-! armored personnel carriers that will be sent to Ukraine. This transaction is contrary to the wishes of the majority of the people of Greece. It should be underlined that the majority of the BMP-1 are on the Greek islands of the Aegean that are threatened by Turkey. Consequently, the Marder vehicles should arrive first before the BMP vehicles depart. And please Ms Baerbock when you visit Ankara after your talks in Athens, do not present this transaction as an attempt to satisfy the Turkish demands that are asking for the demilitarization of the Greek islands.

Germany has opened, through its Federal prosecutor’s office an investigation into suspected war crimes and crimes against humanity committed by Russian forces during the war in Ukraine. This action could be considered justified under the condition that you do not forget the crimes against humanity committed by the German army in Greece between 1941-1944.The Nuremberg trial punished the then political leaders but the reparations of Germany towards Greece remain outstanding. Unfortunately, the Government of Greece lacks the courage to raise this issue with you so it must be done by us.

The total human losses of Greece during WWII amount to 500.000 -600.000 souls.35000 were killed in the battlefields,171.000 civilians were killed in military operations or were executed, while about 300.000 died from starvation. Wermacht destroyed about 1170 towns and villages during the occupation.

The debt of Germany from the obligatory loan that it imposed in 1941 amounts today to a sum between 289 and 500 billion euros. This loan was later on changed to become a contractual one. Consequently, this contractual loan has no time limit and the interest is duly required to be payed on time. You know of course that during the last ten years Germany has been profiting financially from Greece. According to the Halle institute, Germany profited by 2,9 billion euros between 2010 and 2017 from Greek bonds through the program of bond purchasing. Also, during the same period Germany has profited by more than 200 billion euros because the debt crisis in Greece resulted in the reduction of the interest of German bonds by 300 basic units. Greece could stop its payments to Germany within the framework of its memoranda obligations until Germany starts paying to Greece what it owes to it. And it might just do that.

We also were informed that Germany repatriated to Νamibia a number of antiquities that had been moved to Germany in 1906, many years before the nazi regime was established in Berlin. But Germany does not return the 8500 ancient artifacts that were stolen during the occupation and that were included in the catalogue submitted by the Greek Government in 1946.The people of Greece are requesting their return.

If Germany pays its debts to Greece, Athens will then be in a position to pay immediately its debts to the other members of the eurozone and relieve the Greek people from the suffering that they have been subjected to by the ten-year memoranda austerity measures.

We are observing with some concern the new armament project of your country and an amount of 100 billion euros has been allocated for this in your budget. From history we have seen what happens when your country rearms itself to such an extent. This will be the second big rearmament in your history. We hope that this time history does not repeat itself.

We tired you with all that we wrote in this letter but we did so in order that you do not profess ignorance of these facts. 80 years after the invasion of Germany and the occupation of Greece, it is time that Berlin pays to Greece what it owes and in this way it will bring the two peoples closer. We are sure that if the German people were aware of these outstanding issues, they would feel ashamed and would press the German government to act in an honest and just way.